It seems that it’s to make predictions for the property market over the next couple of years.

The predictions have grown more positive over the past few months, and I agree with that.

But I don’t agree with some that are suggesting that we’re going to get a property boom.

In particular, one prediction is that the Brisbane property market is going to increase by 20% over the next few years.

That’s the discussion we’re going to have today with Brett Warren. This is the audio track of our masterclass video that recently ran.

Even though I own the Metropole Brisbane office, you’re probably going to be surprised that I disagree that Brisbane is going to do as well as some people predict.

What to know about the Brisbane property market 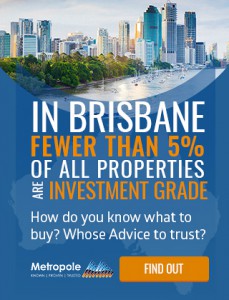 Will Brisbane property markets really go up by 20% over the next few years? Not in most areas. However, if you select the right properties in the right locations, you give yourself the best possible chance of hitting that target.
Over the past five years, Brisbane has performed well below Sydney and Melbourne. There has been a growth of about 7% when you combine houses and apartments. When you break it down, houses performed better than that, while apartments were affected by the oversupply. oversupply.
Brisbane differs from other capital cities in that it lacks the same urban sprawl as other capitals. Jobs are located in the heart of Brisbane, so that’s where to expect the most growth.
Brisbane is in for a surge in property values because there are more jobs being created and both interstate and overseas migration are picking up. People will want to live close to their jobs.
When considering property in Brisbane, it’s important to look for what’s always worked. Owner-occupiers drive the markets, so think about what they look for. The most in-demand suburbs have several things in common, including:

“If anyone can just buy a property in Brisbane, go away on holidays for three years and come back and be much richer, that’s the setting for the next bust again, isn’t it?” – Michael Yardney

“The rich don’t commute. They don’t want to commute far, so they’re going to want to live in certain locations.” – Michael Yardney

Reviews are hugely important to me because they help new people discover this podcast. If you enjoyed listening to this episode, please leave a review on iTunes – it’s your way of passing the message forward to others and saying thank you to me. Here’s how