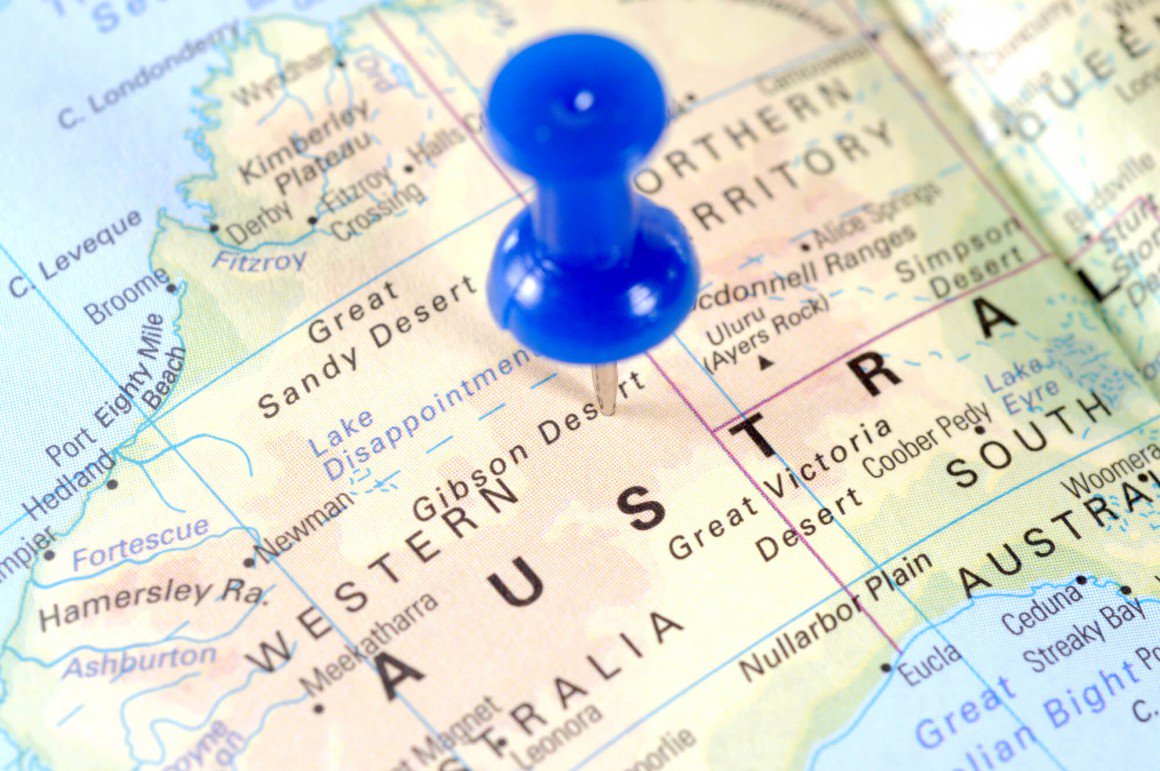 How many opportunities you can reach depends on where you live and how you travel – a new report maps accessibility for our eight capital cities by car, public transport, cycling and walking, writes …

Accessibility – the ease of reaching valued opportunities such as jobs, workers and shops – is the whole reason cities exist.

There is no reason to locate anywhere but to be near things, far from things, or to possess things.

This is because places with higher accessibility are more productive, so their workers earn higher wages.

And modes of transport that reach more opportunities – that is, provide access to places where people work, live, shop, and more – tend to have higher market share.

Our new report, Access Across Australia, for the first time generates a set of consistent maps and graphs of 30-minute access to jobs and workers by each transport mode for each of the eight capital cities.

This covers around 70% of the nation’s resident workers and employment opportunities.

The full report compares 10-minute to 60-minute accessibility to both employment locations and to workers’ homes by four modes of transport – car, public transport, walking, and cycling – for each city.

It also reports the overall job-worker balance, comparing how many workplaces can be reached to how many competing workers want to reach those same workplaces. 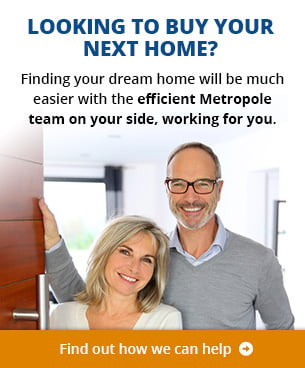 The accessibility measures take into account the effects on travel times of traffic congestion and the walking and transfer elements of the public transport mode.

Accessibility captures the combined effect of land use and transport infrastructure.

The faster and more direct the network, the higher the access.

The more opportunities (people and places) that can be reached, the higher the accessibility.

This value varies across and between regions.

For this article, we show this in maps for Sydney – the full report has maps for all four transport modes, for both jobs and labour (resident workers), for all eight cities.

The rankings in the table are discussed below for each mode.

Cars have higher accessibility than public transport, walking, or cycling.

Perth has the greatest number of jobs and workers reachable by car within 30 minutes.

At time thresholds of 40 minutes and longer, residents of Sydney and Melbourne have higher accessibility than other cities.

During the morning peak period, Melbourne has moderately better car accessibility than Sydney, despite Sydney being larger and having more opportunities overall.

This indicates that roads in Melbourne are faster than those in Sydney. 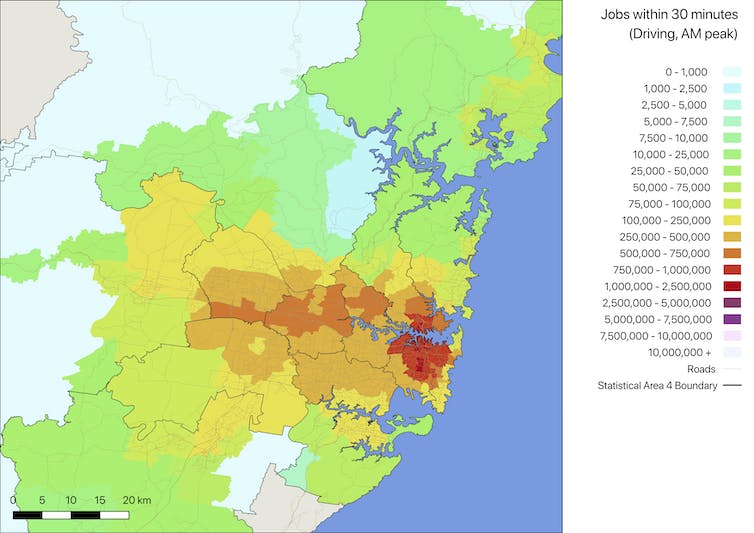 Public transport accessibility incorporates time to reach transit stops and station on foot, and equals the minimum of walking and transit times between an origin and destination.

It remains at a significant disadvantage compared to car travel, reaching between 12% and 18% of the urban opportunities accessible by car under a 30-minute threshold.

Public transport accessibility tends to be high in city centres and low in other places.

The disparity with cars peaks at 20-30 minutes’ travel time.

Sydney and Melbourne have the best public transport accessibility among Australian cities, followed by Perth and Brisbane.

It could be higher still with better-located station entrances and exits. 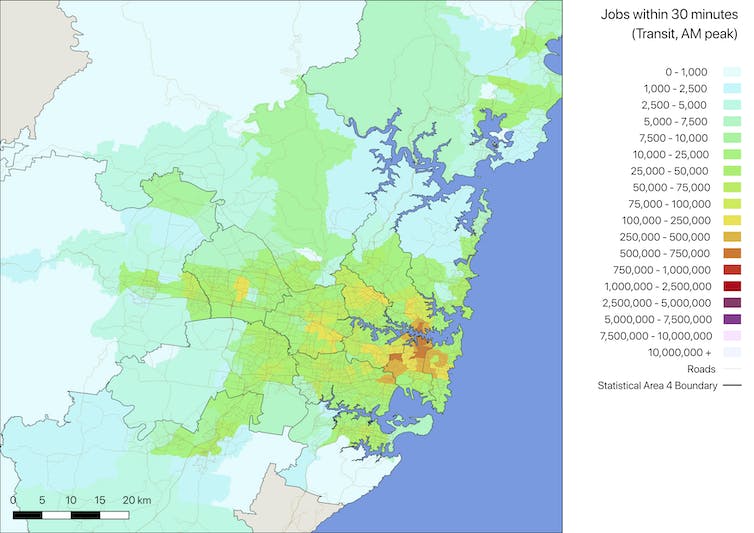 This report identifies cycling as a viable option for improving accessibility.

Assuming cyclists are willing to ride on the street, people cycling can reach about twice as many jobs as people on public transport within 30 minutes in all eight Australian cities, and around one-third of job opportunities reachable by car (except for Perth, which is 16%).

Sydney and Melbourne have the highest cycling accessibility.

Of course, it should be recognised that many potential bicyclists are extremely uncomfortable riding in traffic.

Their accessibility on a more limited network of residential streets and protected bike lanes would be much reduced. 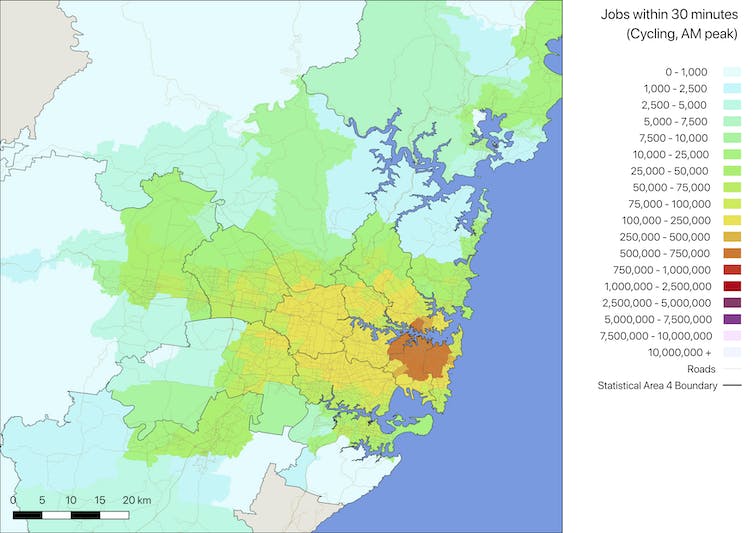 People walking cannot travel as fast as those on other modes, particularly over longer distances, where public transport and cars can travel at much higher speeds.

Not surprisingly, walking has the lowest accessibility of all four modes.

The presence and timing of traffic signals that give priority to cars significantly reduces walking accessibility.

Among the eight major Australian cities, Sydney and Melbourne have the best walking accessibility.

Hobart and Darwin have the lowest. 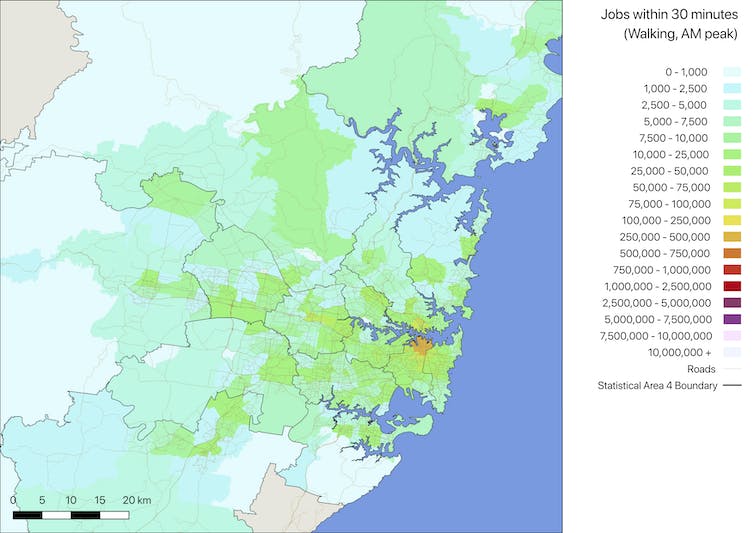 The job-worker balance of a place is measured dynamically as the ratio of jobs and resident workers reachable within 30 minutes.

Higher jobs-to-workers accessibility ratios in city centres show that, in general, jobs are distributed closer to and better connected with city centres than residential locations.

The job-worker balance is a potent indicator for identifying urban centres and for measuring the strength of centres. 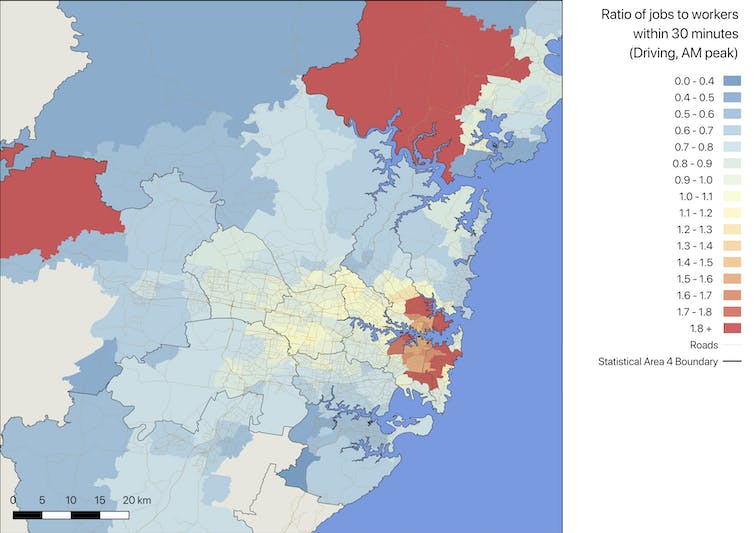 This research gives us a baseline accessibility measurement using the best available data for 2018.

Repeating this analysis over time will enable long-run tracking of accessibility as a performance measure.

This will enable us to answer questions such as: is accessibility by a particular transport mode rising or falling?

Is that due to congestion, network contraction, new infrastructure, or changes in residential or employment density?

Are policies working to expand accessibility for the population as a whole, and for areas within cities?

Which investments give the most accessibility “bang for the buck”?

Some of the results are surprising – in particular, the observation that the speed of Perth’s freeway and street network more than compensates for more limited scale in producing 30-minute car accessibility.

But this result is just an indicator of broader accessibility, which includes additional relevant opportunities, more times of day and more information than is presently at hand.

This is likely to become more widely available in an era of big data if governments choose to actually implement the open data claims they advertise.